skip to main | skip to sidebar

Within the sea glass collector and jeweler community, there is much controversy and discussion over the issue/problem of "man made" seaglass. There are companies that manufacture "sea glass" by putting broken shards of glass into industrial tumblers; huge versions of what "rockhounds" would use to polish rocks. The result is something that "looks like" sea glass-- but really isn't. It does take a fairly skilled eye to tell "fake" seaglass from "the real thing," but there are subtle differences between the two, mainly relating to color and surface texture. 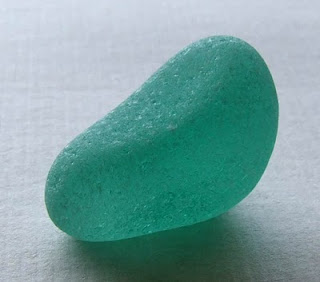 Beach picked seaglass can be quite scarce-- especially in certain colors and shapes-- and should NOT be confused with the glass that can be bought in 5-pound bags at hobby and craft shops. In most cases, it would take a beach comber weeks, if not months, to collect five pounds of genuine surf tumbled sea glass!

In my travels around eBay and the greater Internet I have seen a number of "superb and rare" seaglass items sell for more than $200.00 for a single piece. As of this writing (December 2010) the single highest price I have seen for a single piece of sea glass on eBay is $417.00, for an intact and smoothly frosted cobalt blue bottle stopper. Pieces of vintage orange (generally regarded as the rarest of sea glass colors) sea glass routinely sell for upwards of $50 per piece.

Authentic sea glass (or beach glass) is typically the result of glass-- including from trash and actual garbage dumps-- being thrown into the ocean, getting broken, and then gradually being polished by the action of currents and waves, with sand, rocks and pebbles acting as a "polishing abrasive." It takes many years for a sharp piece of glass to turn into the soft-curved beach gems we sea glass collectors prize so highly. It is not unusual for me to pick up glass I can determine as having come from containers more than 100 years old. And part of the fun is precisely that we collect OLD glass-- the origins of which can be traced as far back as the Victorian era, and earlier.

A couple of the most obvious ways to tell "man made" tumbled glass from the authentic version are color and texture. If you have a handful of what you might call genuine "amber" sea glass (for example), you'd notice considerable variation in color intensity, size and thickness of the glass. Manufactured glass would look almost completely uniform in color. Why? Genuine sea glass comes from a vast range of different original pieces of glass possibly created decades apart, while the manufactured version is most likely from one particular set of broken bottles-- all exactly the same color. 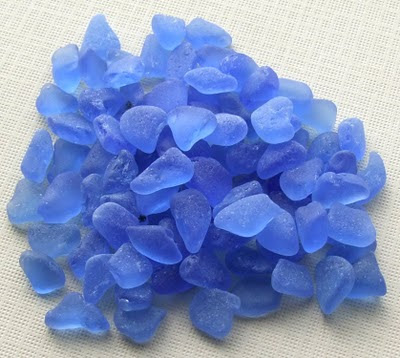 The surface texture is also very important. Genuine seaglass has what collectors call a variable "frosty" surface, while manufactured glass tends to be uniformly "satiny" in finish. One is the result of a creation process that involves time, salt water, sand and rocks of many different sizes, while the other is (usually) the result of tumbling and acid etching. An obvious side effect of acid etching is that the acid corrodes all sides of a piece of glass EQUALLY-- surf and sand will wear more off exposed corners, but sometimes leave concave spots almost shiny.

"Frosting" is a very important word in describing authentic sea glass. The surface of sea glass looks almost like it is "sugary," and under close scrutiny you'll be able to detect tiny "C" shaped marks on the surface. This frosting-- which can NOT be reproduced in an artificial environment-- is the result of a chemical reaction between glass and water, and it takes years (20+) to manifest. Sea glass frosting is most pronounced on glass collected on the shores of salty bodies of water like the Pacific and Atlantic oceans; less pronounced on brackish bodies of water like the Baltic; less still on freshwater glass from places like the shores of Lake Erie.

The Beauty of Natural Sea Glass

I have been a beachcomber since I was a small child. Walking along the edge of the sea has always filled me with a great deal of peace, and a sense of well-being. Picking up the objects washed up by the ocean merely added another level of interest and enjoyment. Sea glass-- those little pieces of once broken glass, now polished smooth by the sea-- are like "jewels of the ocean" for me and many other collectors around the world.

Other web sites about sea glass

Articles about Sea Glass and Collecting